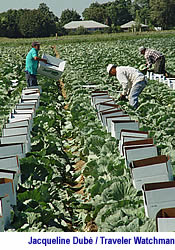 March 13, 1792 was an important day in Riverhead for that was when the inhabitants of this farming and fishing community decided to split away from the town of Southold and determine their own future. A month later – April 3 to be exact – the movers and shakers of the area met at John Griffing’s house (and tavern) for the first official Riverhead town meeting. River Head, as it was first called, began its official march into Long Island history. Already the site of what was arguably the first water-powered milled (John Tooker’s on the Peconic River circa 1660) in New York as well as Connecticut or New Jersey, Riverhead had been county seat for Suffolk County since 1727 when a court and jail were established there to serve both Southampton and Southold.

Although the citizens of Riverhead – thanks to the water power provided by the Peconic River – were noted for running a variety of mills, as well as producing cigars, clothing, harnesses, pickles, and raising cattle, the most important “crop” marketed (to the residents of New York City) prior to 1840 was firewood. But the town’s denizens didn’t rely on the natural stands of trees alone. Farming was in full bloom – and technologically advanced enough that crop rotation was practiced – as early as 1790. Sustenance farming in what would become the town of Riverhead predates that by well over 100 years.

An 1840 census tells of farmers producing wheat (as a “money” crop this was wiped out in George Washington’s days by a fly infestation), hay and salt hay, rye, barley, cucumbers, cauliflower, pumpkins and cranberries. There were 773,549 bushels of Indian corn grown that year as well as oats and potatoes. Potatoes that would eventually become nearly synonymous with Riverhead farming didn’t become a widespread food item until around 1840; between 1880 and 1900 its production increased 250 percent in the Riverhead area, however.

While farming, even with today’s mechanization, is an arduous occupation, it was ever more so in the days of man- and horse-powered farm implements. The 1822 daily account book of farmer Noah Young of Northville notes he spent 11 days hauling manure prior to spending four days plowing it and under so he could plant his wheat crop. The farmers were well aware of the importance of fertilizer, and looked to the nearby waters around them for a large amount of it (fish first appears as a fertilizer sometime around 1814). Peconic Bay provided massive runs of menhaden and the farmers not only used them for fertilizer but also organized co-ops to market them. Coots, Eagle, Peedoodles and Water Witches were all names of the informal companies organized around the Peconic Bay area to take advantage of this fishery. (One story has it that 1,100,000 menhaden were taken in a single day.) Noah Young’s account book notes he spent 34 days fishing in May and June of 1822; in total he spent 54 days that year either fishing or carting fertilizer, 57 days plowing and harvesting, and 38 days cutting, carting or loading cordwood.

By 1865 the average farm in Riverhead had 101 acres, with 42 of those improved and 18 “cropped,” a situation that some out of town farmers found appalling. “The greater part of the farmers appeared to be at least a half-century behind the age,” noted one. This may have been true for some of the farms in western areas of the county, but in Riverhead, 18 acres was about all the one or two-man operations could handle … especially if we use Noah Young’s account books as a bench mark for what had to be done by each farmer. 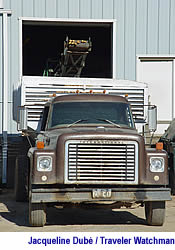 Riverhead’s farmers were visionaries and pioneers when it came to agriculture. When the soil started to show signs of depletion from the use of menhaden as fertilizer in the early 1800s, it was farmer John Woodhull of Jamesport who experimented with mixing the fish with ash, thus restoring the soil as well as fertilizing it. In 1830 grain cradles were introduced to cut grain; in 1855 Michael and Francis Terry brought a combined mowing and reaping machine to their farm. The first horse drawn hay rakes appeared in 1860; Buel Wells brought the first riding rake that dumped its load automatically not long after. The aforementioned Noah Young brought the first binder to town, while Salem Wells showed up with the first cleaner for threshing and winnowing grain in 1860. About two years later Captain Ben Griffin brought a threshing outfit into town that used horses for power; and he and Mr.Tuthill also brought the first steam thresher into the area. Thomas Young of Laurel, showed up with the first power press. In 1883 Nathaniel Miller Talmage brought an Iowa potato digger to local craftsman S. Terry Hudson who built his own design from it. From here forward the potato became the most important crop in the area, and Hudson would go on to design and sell a number of farm implements specifically aimed at local agricultural conditions. A potato blight similar to that which caused the Irish Potato Famine arrived in 1917, and the farmers along with local scientist – one of the most well known was Frank A. Sirrene – introduced crop spraying for pest control.

One of the most important agricultural technologies arrived in Riverhead in 1936. Henry Raynor Talmage saw an irrigating system at a farm in New Hyde Park. He returned home and proceeded to bury six-inch steel mains, sunk a 12-inch well, and ran lines and sprinklers off it. He cracked the valve on May 22, 1937 to a relatively unimpressed farm community. The years 1937 and 1938 were very wet years and farmers couldn’t see the need for the expense of artificial irrigation. A drought in 1939 made believers out of them and within the next ten years fifty-percent of the farms were artificially irrigated. Today there is not a single farm without irrigation.

Besides bringing in modern technology, Riverhead farmers tried new “cash” crops as well. Strawberries were first intentionally cultivated by Daniel Downs in 1856; in 1872 the Riverhead Agricultural Society, known locally as the Farmer’s Club, brought a pound of Algiers cauliflower seed to town and that industry took off. (The Farmer’s Club was the oldest farmers’ co-op in the nation when it disbanded in 1950.)

August Lewin and Herman Prager of Baiting Hollow started peach farming at the turn of the century on their farm in Baiting Hollow. Luce’s Favorite Seed corn arrived after 1915 and the variety became immensely popular with upstate dairymen. The daffodil embargo of 1924 had locals starting production of that flower, and this promoted the use of greenhouses (the last daffodil bulb operation, a Talmadge project, closed in 1960). J. Ebb Wier of Jamesport was the premier supplier of roses in the state and owned the largest early range greenhouses in town. One of the first non-consumable crops to grab hold was decorative horticultural products. “It is the largest single-commodity group now,” said Joe Gergela, executive director of the Long Island Farm Bureau. This segment includes sod farms and greenhouse operations. The most recent cash crop is grapes. The North Fork has become one of the United State’s more famous wine producing regions, and Riverhead is right in the mix.

There are several reasons why Riverhead has continued to stay atop the agricultural ‘heap’ according to Gergela. “Some of the farms were left with excellent topsoil courtesy of the glaciers. The area is well drained and there’s an adequate water supply. Overall, it’s very good land.” Another reason according to Gergela are the “large contiguous parcels” of land. No where else in Suffolk County will you find the large tracts of farm land that make up the Riverhead area.

Add to all this Riverhead’s proximity to the water that provides a mild climate and an extended growing season as well as nearly-four-feet of rainfall annually. The area also receives more sunshine per day than any other in New York State. Though Suffolk County as a whole is ranked nearly fiftieth in farming acreage in the state with some 34,000 acres under production, it is ranked number one in the market value of its crops with a value of nearly $130 million yearly.

The future of farming is not without it problems, however. “We’ve been at the crossroads for a few years now,” said Gergela. “The best plans we have for maintaining farming as a way of life are those that keep farming profitable. Farming’s a business and it needs to be profitable for the farmer to survive.” The encroachment of suburbia steadily attempts to impose its value system on the agricultural industry. The very same people that moved to this area because of its pastoral and rural atmosphere often bemoan what they consider the inconveniences of the agricultural society that surrounds them. Throw in the costs of doing business on eastern Long Island, the temptation to dissolve land holdings for exorbitant amounts of money, the incredibly hard work that is required of farmers and it gets tighter and tighter. “But,” added Gergela, “Our farmers are very good farmers and more importantly very good businessmen. Some are truly visionaries.” Farmers who spend the time and energy to explore new methods, new crops, and new ways of doing business are the one’s who succeed in an economy that was once based on how far – by horse – the next town was, but has evolved into an economy that competes on a world market today. The successful farmer of today has learned how to co-exist with his new neighbors and interact with them on a level the new neighbor can understand: ‘we all live here and value the same resources.’ Of course it is the farmers who have made the natural resources of the area so attractive to others!

One of the immutable strengths of the Riverhead farming community – along with business acumen – is the continuing sense of family that the farming community exudes. It is this sense of tradition and respect for heritage that keeps sons and daughters following in their progenitor’s footsteps. And it is this characteristic that makes Riverhead – and its farms and farmers – the community it was. And the community it always will be.

“When tillage begins, other arts follow. The farmers therefore are the founders of human civilization.” Daniel Webster.

This website uses cookies to improve your experience while you navigate through the website. Out of these cookies, the cookies that are categorized as necessary are stored on your browser as they are essential for the working of basic functionalities of the website. We also use third-party cookies that help us analyze and understand how you use this website. These cookies will be stored in your browser only with your consent. You also have the option to opt-out of these cookies. But opting out of some of these cookies may have an effect on your browsing experience.
Necessary Always Enabled
Necessary cookies are absolutely essential for the website to function properly. This category only includes cookies that ensures basic functionalities and security features of the website. These cookies do not store any personal information.
Non-necessary
Any cookies that may not be particularly necessary for the website to function and is used specifically to collect user personal data via analytics, ads, other embedded contents are termed as non-necessary cookies. It is mandatory to procure user consent prior to running these cookies on your website.
SAVE & ACCEPT